It is interesting that the call of the Kafua bird coincides with the ripening of the kaiphal fruits from April to June…. So if you happen to be here in these months, keep an ear out for this calling bird and taste the kaiphal as well. Incidentally, the Kaifal is the state fruit of Uttarakhand.

It would be interesting for you to know that in the Kumaon hills, on the second day of ‘Makarsankranti’, i.e., on 15th January each year, the Ghugatia or Kale Kawwa (literal translation ‘black crow’) festival is observed especially in honour of the humble crow who despite the extreme cold months don’t migrate, but stay in the same place bearing the extreme climate along with them. Like most festivals that have roots in folklore, it is also believed that a child–prince of the Chanda dynasty, named Ghuguta, was saved from the clutches of a cruel prime- minister by the crows. So early in the morning children dress up and wear a special necklace made of sweetmeats strung together with an orange in the centre. They sing a folk song to attract crows and offer them portions of the treats from their garlands to honour them. The child who is able to feed the Ghughut to the crow first is considered lucky. The remaining food Is eaten by the children. It is also said that from this day, which signals a change of season, the migratory birds start returning to the hills, so the children also feed the mountain dove and the migratory birds as a token of welcome after their winter sojourn in the plains. This unique festival fosters the spirit of kindness towards our feathered friends by generously offering them food at that time of the year, when it becomes scarce for them to find on the fields.

While we are on the topic of birds, here is a list and pictures of 5 different species of birds that are seen on the property. Next time you are outdoors, do try and see if you can spot and identify them…though you can begin to search here and now…

The state bird of Uttarakhand is the Mona or Maniyal as it known locally. Also known as the Himalayan Peacock, and like in other pheasants, the adult male has a multicoloured plumage throughout while the female is more subdued in colour as well as a metallic green crest.

Much like the Peacocks, the male Monals bob their crest and fan their tail feathers to attract the attention of the lady birds!

The most commonly seen birds here you could probably see from any of the deck, if you were to step out…are the swallows…the likeness of which you can see on the purple wall as soon as you enter the main house…a very intriguing fact to note about these birds is that instead of nests, they actually build homes for themselves with clay and mud. The locals consider it auspicious if these birds choose to build their homes in the nooks and corners of their homes. Off and on, a number of such homes have seen on the property. You may want to find out from the Manager, and maybe click a snap or two of these unusual ‘nesting homes’.

If you do see one of these, do observe the speed with which the birds enter their home…as it would require great precision to negotiate the very small opening. What amazing aeronautical skills Nature seems to have engineered into this little bird for it to perform this mind blowing flying feat! It’s almost mesmerising to observe these birds dash in and out of their homes….

Any idea why you think, they do this? Yes! To collect food for their fledglings…

Talking of home, old kumaoni techniques are still prevalent in the architecture of the quaint traditional homes with stone walls, mud floors, sloping slate roofs and painted doors and parapets. Walls are built in a ‘dry stack’ using local stones without any cementing material and then plastered with mud and husk, which provide for excellent insulation. This ‘mitti ka lep’ also acts as a natural antidote to termites and protects the wooden members of the structure from being weakened by them. The Kholis or the main doors with intricate woodwork flanked on either side by perfectly symmetrical windows off set the stark stone masonry of the houses. It was considered essential to have an image of Ganesha or Shiva in wooden lintel above the main door. This ornate wood work was a sign of prosperity in the olden days. And the carpenters here almost never forget to make special perches for birds to make their little homes around. Birds building their homes at entrances are considered lucky, remember? Also, another common practice prevalent in the hills is placing a cactus plant on the ridge of the roof to negate the effects of ill energies. In most old houses, the ground floor is for cattle, while the actual living and sleeping quarters are on the first floor. And there is a reason for this…the heat generated from the body of the cows keeps the above floors or the bedrooms warm!

Traditional Kumaoni houses, are not only beautiful to look at, but are also believed to be earthquake resistant. FYI the famous Lal Bazaar of Almora has an arresting façade of carved panels of double storeyed houses and it may interesting for you to know that these multi storeyed wooden houses employ a unique architecture known as Kham, that has proved to be earthquake proof. Detailed investigations suggest that the region had evolved a distinct and elaborate earthquake-safe construction style as early as 1000 yrs. To mitigate the seismic forces, the traditional structures usually stand on a solid plinth. The huge mass serves as a dampener pad to the earthquake forces. In higher levels, the layering of wood with stone, and the technique of using flexible joints between both these materials make for a non-rigid structure allowing it to flex with seismic waves and thereby  quickly dissipating the destructive energy of the earthquake.  Also the judicious use of wood in the structure, which is both a strong and lightweight material disallows ground acceleration to generate much energy. The structural detailing suggests that those responsible for designing these buildings had a fairly good idea about the forces likely to act upon the structure during a ‘chalak’ and took care in constructing safe homes. 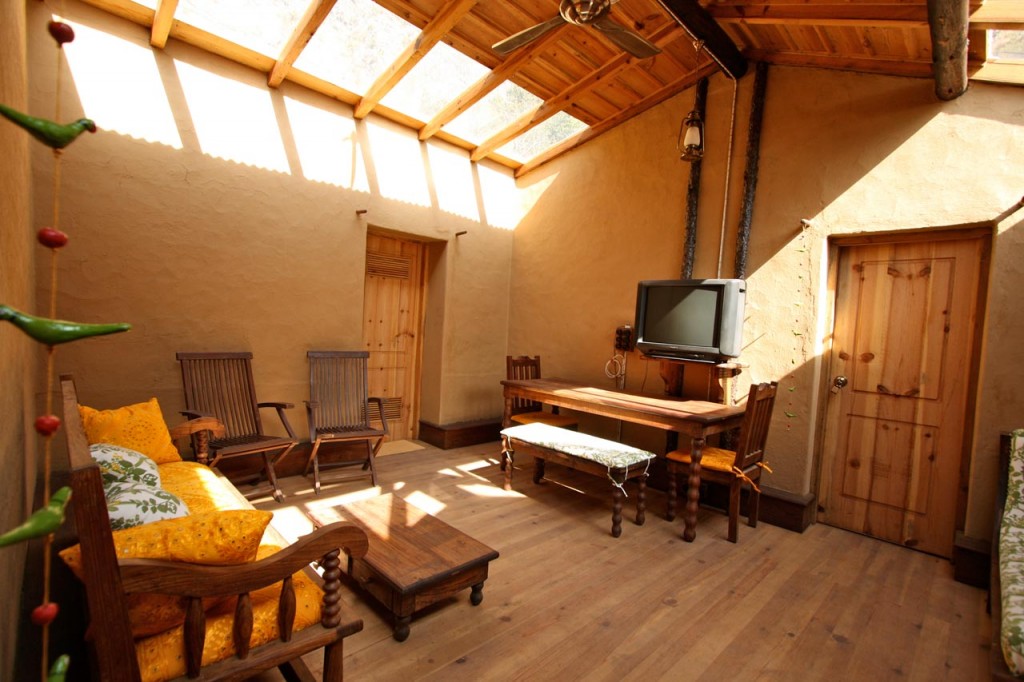 FYI, the village home at the riverside is a living example of old kumaoni architecture, in which some of the distinguishing features of the style are still visible, like the mud plastering of the wall, the wooden main door and the windows on either side. And the tin roof, embellished with the little jhalar. More than a 100 years old, it was restored and renovated with techniques, originally used to construct it. You will be surprised to know that what is room 1, ‘Shant’ was actually a ‘Gaushala’ where the cattle was kept, the living area in the centre was the original kitchen and the room 2, ‘Sahaj’ were the living quarters. On the way to the riverside, you will notice some more examples of local architecture, including the ‘panchakki’ or the watermill. Do notice the ‘kori chinai’ or dry stacking of stones to make the walls…and in the small green patch in front of the Village Home, you will notice a cactus plant, that has been on the property, long before it was acquired, probably kept to ward away any ills. 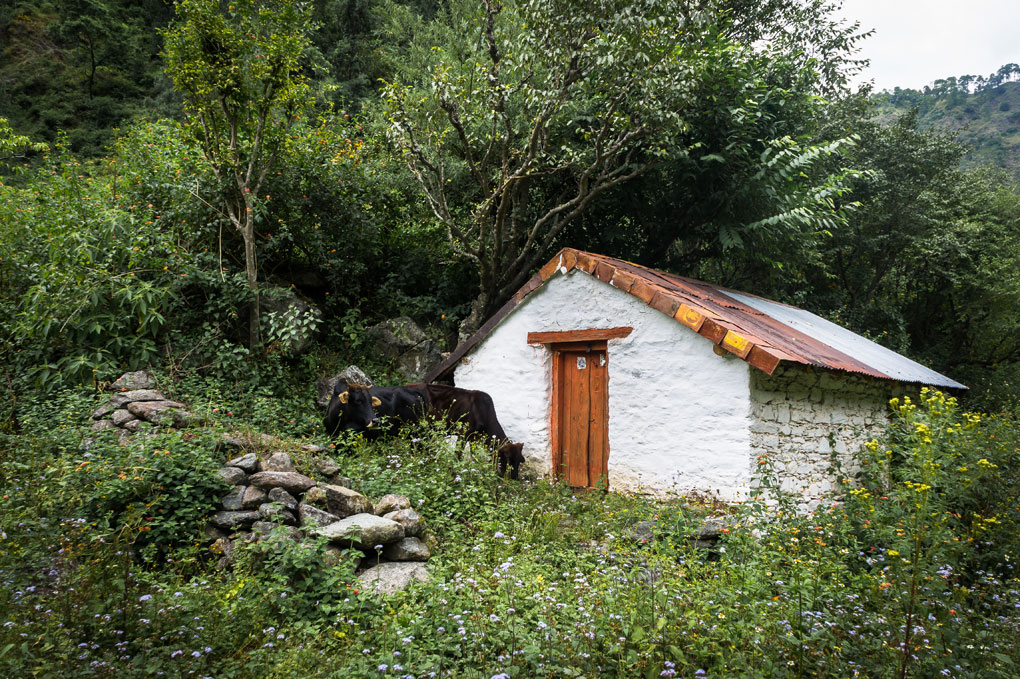 On your journey up here, you may have seen one more distinctive feature of the local hill homes – common to all? The doorstep of every homes here, as well as their open courtyards are adorned with white linear and geometrical patterns with intricate designs and motifs, on a brick red background. This traditional art, known as Aipan in the Kumaon, is believed to be a symbol of good omen which invokes the divine, attracts good fortunes and negates any ill.

Interestingly, the word ‘aipan’ is derived from the word ‘arpan’, which means ‘ to dedicate’. This ritual art is usually the domain of the ladies, who use organic colours made of rice power called Bishwar and Geru, which is filtered red earth powder for making this decorative art. No artificial colours are used in this art form. The dripping of ‘bishwar’ is done by the Anamika or the Ring finger. This ceremonial and decorative art is of great significance during religious ceremonies, when specific designs are made for different occasions.

Did you know that Aipan as a form of art is very popular in many parts of India? It is known by different names in different parts of the country and each region has its own unique variation. It is called Alpana in Bengal, Satiya in Gujrat, Rangoli in Maharashtra, Chowk pooran in UP, Kolam in south India, Madne in Rajasthan, Arichan in Bihar and Bhuggul in Andhra. The ‘bindu’ or the dot – which signifies completeness, is an important element in Kumaoni Aipan. While drawing care is taken that the group or block of lines ends with the dots. In fact any Aipan without dots is considered incomplete and inauspicious. Remember, the Pichhaura also has dots printed all over?!

The dots or the ‘bindu’ is a very strong element of Kumaoni art which is the basis of another form of folk art, namely ‘pata’ or wall paintings. Apart from their decorative purpose, this form of art also conveys narratives over a series of panels, like a picture book. Pata meaning ‘to make by hand’ employs a very tedious technique of painting called ‘bar-boond’ or dot and dash pattern, which is done by putting down a series of dots to make the outline of the design and then joining them together by lines indifferent colours. The themes of the patas are mostly religious and each deity is represented by a colour that is uniquely his or hers.

The seat of the gods and goddesses and the floor of the place of worship is decorated with specific motifs called peeth. This art is closely related to the Aipan.

A special type of aipan of an ugly demon is drawn on the outer side of a bamboo winnow or soop to negate any ill luck while on the inner side the likeness of Lakshmi Narayan are sketched to welcome the God and Goddess of happiness and prosperity. This is akin to the tradition of putting up ‘Nazrbattus’ in most parts of the country, so that the home does not attract the unnecessary negative attention of outsiders. It is interesting to note that the locals here, even in matter of personal dressing, take this tradition ‘pretty’ seriously as a smear of ‘kajal’ or kohl is usually applied to ward away the evil eye!