स्वागत छू तुमर! Or Welcome back to the next chapter…. 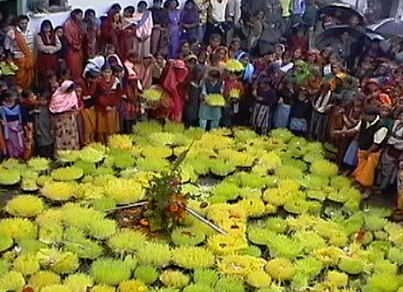 From the resplendent peaks and the rolling hills, to each blade of grass and the enormous variety of flowers that bloom here, we are in the midst of so much natural beauty that the emotion it generates, is difficult to contain within. Flowers are like the embellishment of the earth and the beginning of the flowering season is marked by the celebration of the unique ‘Phool dei’ festival in the month of March. On this day, young girls fetch wild flowers from the forests. These new blossoms are considered a sign of good luck in the hills. Then with a plate bedecked with rice, jaggery, coconut, green leaves, flowers and flower petals in hand, they sprinkle  these flowers and rice  in front of their own doorsteps as well as at the doorsteps of the other villagers, wishing them  good health and  prosperity. In return the girls receive presents and sometimes, money as well. While on the subject, it may be good idea to stroll in the lawns sometime to see all the different types of flowers that are in full blossom. And before we move into a more fruitful discussion, it might be a good time to check if we all know, that in the life cycle of a plant or tree…which part actually flowers into the vegetable or fruit? The answer is contained in the question itself! It is the flower ripens into a fruit…

Ramgarh is known as the ‘fruit bowl’ of Kumaon, and the Gagar pass, where we are situated is the gateway into this very picturesque little hamlet, famous for the luscious fruits that grow so plentiful here. Orchards with Plum trees, Apricots and Peaches trees form the landscape of this sleepy little town.  The quality of the fruit is so good here, that Mother Dairy has established its Safal factory just before Ramgarh market, which preserves the best of these fruits in the form of Juices, Squashes, Jams and Jellies. In fact a number of their products never reach their chain in Delhi. In case you do happen to trek to the Market, do drop in….and if you are lucky enough to find their ‘Strawberry  Preserve’ – as opposed to the  ‘Jam’ do pick up a couple –  as it renders itself very well to desserts, not to mention what a treat it makes of a crisp hot buttered toast!! Their peach halves are also worth a mention!

Many varieties of fruits trees grow on the property itself, including the very old plum tree right in front of the main house, as though standing there to welcome one and all. While you are here, why not go on a ‘tree walk’ to see and identify fruit trees, some of which, like the plum tree mentioned earlier have been here forever, as well as those that have been more recently planted. While you look at all the fruiting trees, do observe one thing….that the more laden the trees are with fruit, literally the more down to earth are they…does that teach us something too….about humility? The more gifted we are, the more humble we should be??

And when do get down to earth…literally, you will be able to see all the interesting foliage that grows close to the ground…including many herbs. Look out for the fresh spearmint – take just one leaf and crush it with your fingers and smell….and one gets such a burst of freshness as though a 100 tubes of toothpastes have been squeezed out together!!!

Likewise, try and locate another very popular herb, Rosemary, which is used a lot in cooking…Take  a few leaves from a sprig and squish it between your fingers and you will get such a burst of a familiar flavour…Does it remind you of something you may have eaten here? Maybe the country chicken casserole or a sauce that your pasta was tossed up in? Rosemary is an aromatic used to flavour many dishes in continental cuisine. Maybe while you are here, you may want to plant the herb of your choice in a little pot, with the help of the gardener and take your little potted friend back with you! And do remember to ask for instructions on how to care for it.

While you are on this excursion, do ask someone to show you a special plant native to this area…the ‘Bichchu Buti’ which as the name suggests is a ‘Stinging’ nettle… Be careful not to touch it, or it will sting like a scorpion locally known as a Bichchu. But strange are the ways of Nature, as wherever it sends a malady, it also offers its solution too…the Palak Patta always grows close to the Bichchu Buti – and according to the local wisdom, the stinging – ness of the Bichchu ghaas is reduced if one rubs the Palak Patta where one has been stung!  Most Pahadis would have brushed against this devilish weed and scratched themselves silly at least once in their lifetime, so they know its cure too! BTW, the locals use the Bichchu Buti to make a very yummy dish called the Bichchu Buti saag…

Bicchu ButiAlthough stinging nettle does cook up into a tasty vegetable, it has another medicinal purpose too…people suffering from arthritis sting themselves with it by grasping the plant in a gloved hand and then swatting their stiff, swollen joints. This practice, called urtication — from nettle’s botanical name, Urtica dioca — dates back at least 2,000 years. Although it’s an odd-sounding practice, there’s no escaping the fact that it’s been around so long precisely because it helps so many people. Sounds like an instrument of torture….doesn’t it? Actually it was during colonial times….And a little less known fact about this nettle is that it is also used to make a fibre, which is then spun and woven into Handloom fabrics as well as knitted into very fancy stoles…

Some of the organisations that create these products are run by those who want to do good for the people of the hill by providing livelihood to local artisans and weavers, while others concentrate especially on empowering the ladies of the hills. These units employ the womenfolk of the area, teach them the requisite skills to handcraft fabrics and garments and then sell these through little shops that dot the mountainscape. It is very interesting to note that some of these NGOs actually write the name of the lady on the tag, who has made or woven a particular garment! It makes each piece that much more unique, bearing the name of its maker!! Next time you visit a Himjoli, do take a minute to view their tags!! Other such organisations that have tapped into the women power and integrated them into the work force, have done so in a flexible manner whereby the women don’t need to abandon their homes and domestic responsibilities  include Avani and Panchachuli….OK that’s a full circle now as it brings us back to our favourite Mountain peak!! Hopefully, by now you have caught a glimpse of it….or are the clouds still playing ‘peak – a-boo’ with you?!! Even if they are playing truant, don’t worry, be patient…we all know ‘sabra ka phal meetha hota hai’!

Talking of ‘phal’ – another local fruit that we cannot not talk about is very interestingly alluded to in this Kumaoni riddle….

This literally translates as – “In childhood it is green and in youth it is red and in old age it becomes black. Now O bird tell me what it is?” It is the kafal fruit, which is green when it fruits, then becomes a ripe red, and lastly becomes dark, almost black in colour. The kaiphal….which is also known as the Himalayan bay berry is inextricably linked to the Kafua, a cuckoo bird named after the kaiphal itself. And thus story goes….

Once upon a time, in the month of Chaita (Summer), the ‘Kafal’ were fruiting in abundance in the forests. A village woman went to pick the fruits with a Dala (Basket), in her arm and by mid–day, had collected, a basket full of them.  Upon returning home, she used the Tami (a local measure) to carefully measure out all the ‘Kafal’ she had picked. Since she still had a few more house-hold errands to run, the lady had to go out again.  But before she left, she told her daughter to take care of the fruits and also warned her not to taste them until she came back home.

Since it was a hot summer’s day, the fruits soon dried up losing their moisture. The diligent daughter sat beside the basket of fruits and patiently looked over them. And, as instructed by her mother, she did not taste, even a single fruit. Her mother returned in the afternoon and when she measured them again, she found them short. Not realising that the fruits had lost their moisture due to hot sun, the mother presumed that her daughter had eaten them. Without any further thought, she punished the poor little girl for something she had not done. It is said that the little girl’s heart broke and her soul took flight. Transforming itself  into the very elusive Kafua bird, it broke out into a plaintive song, heard even today at the ensuing of every summer… Kafal Pakko -Kafal Pakko, Meil ni chakho – Meil ni chakho“, meaning, ‘Kafal has ripened, but, I have not tasted’, in an effort as thought to still prove her innocence. Later that evening, the mother did realise her mistake, when she re measured the fruits once again. Due to cold wind and moisture, the fruits regained their lost moisture, but by then it was too late….