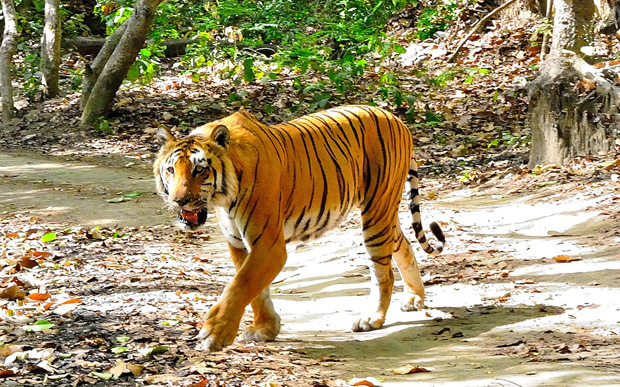 Corbett National Park acts as a protected area of critically endangered Bengal Tiger of India. Corbett National Park is one of the best managed and protected areas in the country and attracts thousands of Indian and Foreign visitors each year. the park is situated at the foothills of Himalayan belt and has various geographical and ecological characteristics with splendid landscapes. There are four gates which acts as entrance to the Park, which are Amdanda gate, Dhangarhi gate, Khara gate and Durga devi gate. If you are an adventure freak, bird watcher, angler, or animal lover then Jim Corbett National Park is the ideal place for you.

Please Note: It is always advisable to book safaris prior to arrival, especially during weekends as there are only 60 vehicles allowed inside the Corbett National Park at a time. Depending on the number of guests, the estimated cost of safari vehicles will be between Rs 2600 – Rs 4000. Guests can directly contact the hotels and book their safaris.

Jhirna: A densely wooded and grassland habitat, it makes for excellent bird viewing. The Great Hornbill is found in abundance here. Jhirna is home to a population of sloth bear and wild elephants and a growing tiger population. A large grove of ‘Flame of the forest’ adds drama to Jhirna. A strong prey base of nilgai, cheetal, sambhar and the wild boar also makes it an attractive area for the big cats, while a resident wild elephant and sloth bear population offer great sighting opportunities.

Bijrani: These forests range from those of pure Sal on the upper reaches, to deciduous mixed forests in the valley, along with three major grasslands. It sustains a variety of herbivores, and has a wide network of jungle roads, making Bijrani excellent tiger sighting territory. carved out of a shooting block, with a wide network of criss–crossing jungle roads, offers excellent tiger sighting opportunity. On Corbett’s eastern boundary, Bijrani’s forests are dense with a wide variety of vegetation: of pure Sal forests on the upper reaches and tropical moist, deciduous mixed forests in the valley and plains. Excellent water availability throughout the year and wide grasslands make it an exceptional habitat for a strong prey base and its predator.

Dhikala: This is the largest and most varied zone in Corbett, offering the best opportunities for overnight stays. Dhikala contains a diverse range of habitats: its higher reaches suit Ghoral, a goat antelope, while the Gharial and Maggars, as well as the great Mahaseer, inhabit the rivers below. The hog deer is also exclusive to Dhikala. Dhikala offers the most varied terrain in all and, if booked well in advance, the widest range of Forest Rest House accommodations in the park. This block of forest has the Ramganga river stretch through its middle, emptying into a wide, multiple–necked reservoir.

Sonanadi: A centre range in the Corbet National Park, Sonanadi range is famous for wildlife beauty with amazing flora and fauna. Over 550 species of birds are recorded here with leopard, tiger, cheetal, sambhar and raptiles.

Check out the official website of Corbett National Park for booking of Safari in Jhirna, Dhikala and Bijrani Zones: www.corbettonline.uk.gov.in