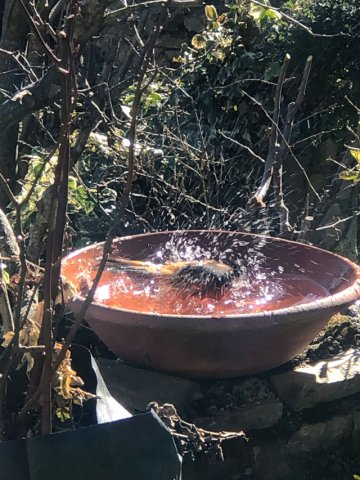 Birdwatching, or birding, is a form of wildlife observation in which the observation of birds is a recreational activity. It can be done with the naked eye, through a visual enhancement device like binoculars and telescopes, or by listening for bird sounds.

The hill state of Uttarakhand has terrific avifaunal diversity. Uttarakhand may be one- sixtieth the size of India, but according to the State Forest Department it is home to about 687 bird species which is more than half of the 1303 bird species recorded in the country. Of these, about 39 species are listed as globally threatened according to the IUCN Red List. While it is important to celebrate this wealth, it is crucial to protect it as well, for which reason, the Eco-Tourism wing of the Uttarakhand Forest held a series of bird-watching camps in different destinations spread across the state, where forest staff, local community members, tour guides and others were taught the basics of birding.

In order to boost ecotourism via bird watching, the State Government organised its first ‘Uttarakhand Spring Bird Festival’ at the Asan Conservation Reserve from 5th
to 9th Feb. 2014. It was such a success, the organisers immediately decided to make it an annual affair!

A commendable initiative to promote birding by the State Forest Department in collaboration with other groups like the Titli Trust, Kalpavriksh and Himal Prakriti, these series of bird watching camps and festivals has provided an impetus to birdwatching in the state. The Uttarakhand Forest Department’s endeavours to engage people from all walks of life in this important sustainable tourism initiative which will help to conserve Nature, while providing livelihood opportunities to communities.

The recently released “Uttarakhand: A Birdwatching Heaven”, edited by Sanjay Sondhi and produced by the State Forest Department and Titli Trust lists 20 hotspots of birding, and gives a brief glimpse of their location, features, key birds likely to be seen, and local contacts. Not all of these are official protected areas. Indeed, great birding can be done outside them too, including in areas conserved by communities such as Van Panchayats and forests protected right from the days of the Chipko movement

Following photos of birds are shot at Soulitude by Vinish Wazir